River Legacy Park is home to hundreds of spider species. One very common spider species is the dark fishing spider (Dolomedes tenebrosus). This spider is primarily found on trees and it is most often seen in the month of May, although it can also be spotted all the way until September. Despite the fact that it is called a “fishing spider,” it does not live near water or fish. It is in fact, the most terrestrial, of the fishing spiders. It is quite big: females can measure anywhere from 15 to 26 millimeters whereas the males tend to be smaller, from 7 to 13 millimeters. The female produces egg sacs that can contain up to 1,000 baby spiders inside!

Spiders serve many purposes in the ecosystem at River Legacy, mainly prey control. It is estimated that all of the world’s spiders consume about 400 to 800 tons of prey each year! Spiders are also a great group of organisms for learning a wide array of concepts: predation, invertebrate biology,  how venom works, the amazing design abilities of the animal kingdom, etc.. Learning about spiders can help in reducing arachnophobia.

During our Spectacular Spiders Summer Class, students will learn all about spiders and why they are cool and interesting. Space is filling up quickly though so visit our website to sign up and learn more information. We hope to see your child there!

Last year, we talked about spiders and their benefits to nature. Today, we revisit spiders to talk about a very interesting trait they have – their venom. Almost all 46,000 spider species have venom. Fortunately for us, there are only a very few that can actually harm people. In our area, there are only two types of spiders of concern: the black widow and the brown recluse spider. Black widows are distinctively black and have a red or orange shape on the back of their belly while brown recluses tend to have a violin-like shape on the back of their thorax.

Spiders primarily use their venom to paralyze prey so they can eat it. The venom is injected into the insect through the spider’s fangs. Spider venom usually is one of two types. Certain spiders produce neurotoxins, which attacks the nervous system of the prey. Other spiders produce cytotoxins, which help in turning the prey into liquid form. This makes it easier for the spider to consume it. In many ways, spider venom is not that different from snake venom.

If you would like to watch a spider eat, we invite you to our public feedings on Fridays at 4:30 pm to see our Texas brown tarantula (Aphonopelma hentzi) eat in his exhibit. Usually the venom will not be seen, but you can be assured the spider is using it to eat its food! 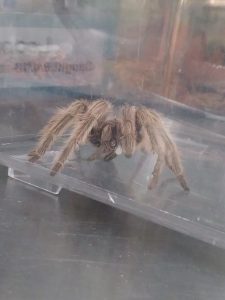 Left: Our Chilean rose hair tarantula eating a cricket. A venom drop, in white, can be seen on the right side of the mouth.

Spiders (Class Arachnida) are animals that, often times, get a bad reputation. Some people find them creepy, dangerous, menacing, etc. While there are some species that do present a danger to humans due to their venom (black widow, brown recluse), most spiders are beneficial and a crucial part of the ecosystem.

Spiders are carnivores whose prey includes many species of insects, thus keeping their populations in check. This is especially important for agricultural crops. Simply put, without spiders, swarms of vegetable-devouring insects would overwhelm much of the world food supply. In addition, they also eat mosquitoes and flies, which can carry diseases. On top of that, many of the things that spiders produce such as venom and silk are being used in innovative ways in the medical and engineering fields, respectively.

Here at River Legacy, there are dozens upon dozens of spider species. As you walk around our trails, take a close look at the dozens of spider webs that can be seen throughout the forest. If you see a web that looks like a funnel and it is very close to the ground, it likely was made by a grass spider (Genus Agelenopsis). Orb weavers (Family Araneidae), including the yellow garden spider (Argiope aurantia) (pictured), and wolf spiders (Family Lycosidae) are also very common.