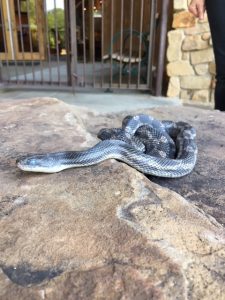 Hi guys!! I am Smokey, a Western Rat Snake. I am the newest Animal Ambassador to River Legacy Living Science Center and the latest resident to our public exhibits. I was brought from the Fort Worth Nature Center because I needed a larger home.

I am 6 years old with a beautiful yellowish, tan color and irregular blotching from head to tail. I am active during the day, especially when I’m hungry! Hey, you can come see me eat every Friday at 4:30! Sometimes when I get disturbed I let out a hiss, but not to worry, I‘m not venomous, merely voicing my opinion.

Actually, my relatives and I get confused with rattlesnakes because we look alike and we both shake our tails, but Western Rat Snakes do not actually have a rattle. Generally, though, I am a nice girl so come on over and see me! I am so excited that I just got a larger home with lots of room to climb! I might be hiding up high, so look closely. 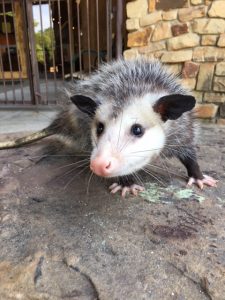 Poppy the Virginia Opossum found her way to River Legacy Living Science Center after she was rescued and rehabilitated from being hit by a car. Due to the injuries sustained, she was not able to be released back into the wild. This is unfortunate due to the many positive benefits opossums provide to an ecosystem.  She is very sweet and curious about her new home. She loves eating hard-boiled eggs, crickets and strawberries.

When people encounter this ambassador in the wild, the feelings are a mixed bag. Some think this nocturnal creature is either cute or ugly; others think it looks like a giant rat. The Virginia Opossum (Didelphis virginiana) is a very unique creature. It is North America’s only marsupial, which means it has a pouch. Average life span of a wild opossum is 1 to 3 years; life span of a captive opossum is 2 to 5 years.

Opossums have a remarkably robust immune system and show partial or total immunity to the venom of rattlesnakes, copperheads, and other pit vipers. (Remember, North Texas only has two venomous snakes, the rattlesnake and copperhead.)  Opossums are about eight times less likely to carry rabies than wild dogs. This is due to the fact that their core body temperature is lower than most mammals and the virus cannot live in this cooler environment.

Another benefit from having opossums in your neighborhood is that they will eat and therefore kill ticks that are in their fur.  Opossums are fastidious groomers.  A study by the Cary Institute for Ecosystem shows that an opossum may eat up to 5,000 ticks in a season. Ticks can cause a variety of issues for humans, including Lyme Disease.  Now, the opossum is not single-handedly stopping Lyme Disease, but if the opossum takes care of ticks in its own body, then those are less ticks in our yards and natural areas.