Have you ever thought about this? Think about it for a minute. If you were to list 10 mammals off the top of your head – perhaps animals like your dog, cat, an elephant, rat, zebra, skunk, raccoon, opossum, bobcat, or even a coyote – you would quickly realize that the colors of these mammals lack blue and green hues. There are a couple of reasons as to why this is, and why other animals like insects, birds, amphibians, and reptiles exhibit these colors quite often.

The reason has to do with chemistry primarily. First off, let’s talk about what produces colors in living things. Pigments are chemical compounds that are responsible for producing color in the biological world. When pigments absorb light, they reflect back certain wavelengths, producing colors our eyes can perceive. Plants, for example, have many different kinds of pigments with all kinds of peculiar names, such as carotenoids, flavonoids, and anthocyanins. Thousands of these chemicals have been identified by scientists and this is the reason why plants can produce a vast array of colors – from the dominant green leaves, to different shades of bark on trees, to the orange color of a carrot, the colorful fruits and flowers there are and the beautiful foliage colors we see during autumn in temperate latitudes.

When it comes to animals however, things are a bit different. The vast majority of animals simply do not have the variety of pigments that plants do. Specifically, they are not able to genetically produce blue and green pigments. Then how come we still see animals that are those colors? There’s blue butterflies, green frogs, and peacocks are well-known for their blue feathers! Most of these animals produce this color through a phenomenon known as structural coloration, which is the optical illusion of a color, essentially. Small structures of the skin scatter and reflect back light in a way so that only the blue wavelengths reach our eyes. But, in reality, there is no blue pigment doing that. When it comes to green, usually there is a yellow pigment involved with a structural blue coloration.

For instance, when a rough green snake (Opheodrys aestivus), a common River Legacy snake, dies, it turns blue because the yellow pigment is no longer being produced but the structural color is still there. Another way animals are able to produce vibrant colors is by obtaining pigments from their environment, typically their diet. This is how flamingos develop their typical pink to red hue, by eating foods like algae, shrimp, and crabs that have these pigments in them. A similar phenomenon occurs with the northern cardinal (Cardinalis cardinalis), another River Legacy common sight.

Now, let’s go back to mammals. Mammals have not been able to evolve or have lost the ability to implement pigments obtained through their diet to the same extent as other animals have. It happens but not to the same degree. This is why eating something like beets can turn the toilet a certain color when we go to the bathroom but it does not turn our skin purple. When it comes to naturally-produced pigments, mammals really only produce one kind – melanin. Melanin is an important pigment that provides protection against the sun’s damaging UV rays but it also is responsible for the majority of colors in mammalian skin. It comes in two kinds – eumelanin (responsible for black and brown colors) and pheomelanin (responsible for yellow or reddish to brown colors). Very few mammals, like mandrills (a type of African monkey), are able to produce small amounts of blue color through structural coloration.

But, how come no other mammals can? Scientists are not really sure but it may have had to do with the evolutionary history of mammals. Early mammals survived during the Mesozoic era, the golden age of the dinosaurs, by basically not being around them too much in order to avoid becoming food or by not trying to compete with them for the same resources. It is believed that most dinosaurs were active during the day so it is most likely that mammals had to turn to a largely nocturnal lifestyle. This meant that mammals did not have the need to develop adaptations that were not necessary in the night, such as the ability to see a wide range of vibrant colors. If there was no selective pressure (i.e. need) for either evolving structural coloration, pigment formation, or the ability to obtain pigments through diet, then the genes that allowed for those traits disappeared from the mammalian gene pool. The majority of animals today, with the exception of most mammals, have stellar color vision. On the other hand, as a result of their evolutionary history, mammals tend to be color-blind when it comes to blue and green colors. The big exception to this are primates – the group to which humans and mandrills belong. Therefore, it is hypothesized that as a result of all of this, the vast majority of mammals lack green or blue colors on their skin or fur.

What an incredible and fascinating subject to be sure. Next time you take a hike in the River Legacy trails and you come across a mammal – whether it be a squirrel, bobcat, or rabbit – you will know why those creatures are not flashing blue and green at you! 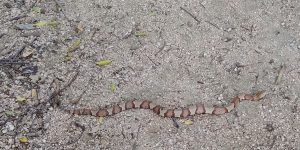 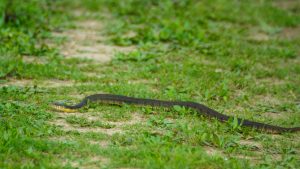 No alarm needed, just a dose of caution,  if you spot a snake on the park trails or even in your own backyard. Like most wild animals, snakes are more afraid of you than you are of them.

Just like checking weather conditions and packing enough water are necessary steps to prepare for any outdoor outing, so should being aware of the wildlife you may encounter. The first thing to keep in mind is that these are wild animals, and wild animals need space. If you encounter a snake along a trail, be sure to observe from a distance. Most snakes will move quickly off the path while others might stay as still as possible. If you can, walk around the snake, giving it a wide berth.

The best course of action is to leave it alone and observe or take pictures from a distance. Most snake bites occur when people try to pick up, move or kill a snake, all of which are unnecessary. Another way to avoid snake bites is to always be mindful of where you are stepping or placing your hands while hiking a trail that is either paved or off-the-beaten path. Be sure to look where you are walking and never reach down to grab something unless you have complete visibility.

Many snakes, like copperheads, like to bask in the sunlight and can be found doing so stretched across a trail, log, or parking lot. Copperheads are venomous but are not aggressive. Rat snakes are another common snake spotted in this area. Rat snakes are non-venomous, help control the rodent population and have excellent camouflage. They are typically spotted climbing trees or sliding across your backyard or trail.

Learn more about snakes common to our area at River Legacy Living Science Center and check out our exhibit of snakes, as well as other wildlife native to River Legacy Parks.